Wick Academy booked their place in the first round of the Scottish Cup as two penalties by Craig Gunn helped them on their way to a 3-1 extra-time victory over Musselburgh Athletic.

The second preliminary round tie went ahead at the fourth attempt in front of a socially distanced crowd at Harmsworth Park on Monday night and the Scorries now face an away trip to League Two side Cowdenbeath on Boxing Day – just as level four Covid restrictions begin for the whole of mainland Scotland.

Musselburgh had their keeper Ryan McGurk sent off in the second half but the East of Scotland League team showed plenty of character and were given renewed hope when Mathu King nodded in an equaliser to cancel out Gunn's early spot-kick.

However, Gunn slotted home another penalty in the first period of extra time and substitute Mark Macadie put the issue beyond doubt in the closing stages. It was Gary Manson's first competitive win as Wick manager and he was full of praise for the energy shown by his squad on a tricky playing surface.

After their six-hour bus trip to Caithness, a frustrating night for the under-strength visitors culminated in their manager Kevin McDonald being given his marching orders by referee Lee Robertson – although McDonald later insisted he had been wrongly accused of speaking out of turn.

Academy threatened early on as Richard Macadie, Davie Allan and Alan Hughes linked up to create a chance for Gunn but his angled shot zipped over the bar. At the other end, Jordan Orru picked out Dean Ballantyne whose first-time drive struck the outside of a post.

Gordon MacNab had a claim for a penalty waved aside but the breakthrough came in Academy's next attack, with 12 minutes gone, after Sean Campbell was bundled over by Jono McManus. Gunn stepped up and dispatched the spot-kick to McGurk's left as the keeper dived the other way.

Musselburgh's Conor Thomson got a glimpse goal at the top end and stung the palms of Graeme Williamson with a swerving drive.

A knock-back by Allan reached Richard Macadie on the edge of the box and the midfielder clipped his shot just wide of McGurk's left-hand post. The Scorries were pinned back in their own half for much of the first half, though. 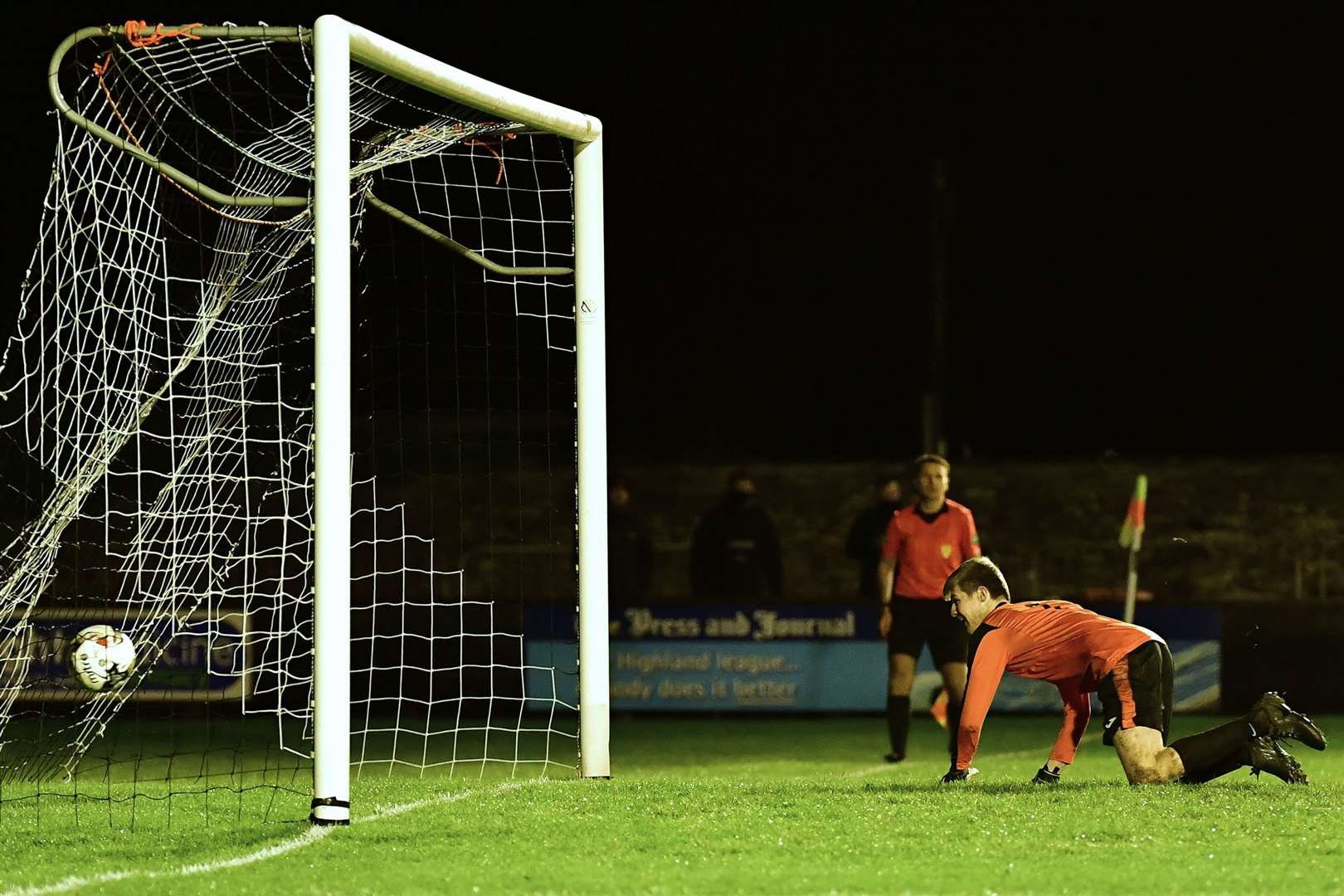 McGurk had been rarely troubled but his night was cut short after 63 minutes. A long-range diagonal pass from Gunn found Campbell racing towards goal and the advancing keeper handled the ball just outside his box – giving Mr Robertson no option but to brandish the red card.

Ballantyne was sacrificed as the visitors brought on their under-20 goalkeeper Ross McRae for his first-team debut.

The 10 men deservedly got themselves back on level terms in the 84th minute. Callum Donaldson's cross from the right found King in the centre of the penalty area and he had time to pick his spot with a well-placed header.

Academy were awarded a second penalty with 101 minutes on the clock when Mark Macadie's effort was adjudged to have struck an outstretched arm. Gunn chose the other side this time, sending the ball to McRae's right to put the Scorries back in the driving seat.

At this point McDonald fell foul of Mr Robertson, who marched over to the technical area and showed the Musselburgh manager the red card.

Wick's Ross Allan and Musselburgh's Lloyd Fiddler were involved in an angry exchange as the game threatened to become an ill-tempered affair.

Sean Campbell had been a livewire presence all night for Academy and he looked set to seal the win after being released by Gunn, only for McRae to get a vital touch. Campbell soon had another attempt which was blocked by the keeper only for Mark Macadie to seize upon the rebound and fire the ball high into the net to kill the game with three minutes of extra time remaining.

Gary Manson said: "I thought we started extremely well and in the first 15 to 20 minutes we were by far the better team, creating quite a lot of chances and looking comfortable at the back. Then for some reason we kind of took our foot off the pedal a little bit.

"We scored our goal and I don't know if we felt a little but too comfortable in the game but we allowed them back into it.

"In the second half they were going down the hill. They pushed and pushed and managed to get their goal. It was a bit sloppy from our point of view but they were probably good value for their goal at that stage.

"In extra time they were down to 10 men and I thought we were by far the better team. We scored another two goals and could have wrapped it up even more comfortably.

"I don't think either goalie was troubled much and the pitch probably had a lot to do with that. The pitch was not in a great shape and that plays a big part.

"Over the piece I thought we were deserving of our win. Overall I can't have any complaints. The boys put in a tremendous shift and got over the line, which is what it's all about in a cup tie."

Manson was pleased with the fitness levels shown by his players.

"Their boys were going down like flies with cramp and we were still looking fresh," he said. "I said that to them going into extra time. We were in the ascendancy and in extra time we were the team looking to push to win the game. It's a credit to them and it's a credit to their fitness levels."

As for recording his first competitive win since being appointed as manager, Manson said: "Hopefully that's the first of many, and that will help build belief and momentum now."

Kevin McDonald reckoned Musselburgh had been the better team and insisted the second penalty should not have been awarded.

"Even with 10 men we played the better football and we looked dangerous," he said.

"I've not really got an argument with the first penalty – I can see why it was given. But I've got a massive problem with the second one.

"My player has actually got the ball mark on his back where the ball has hit him. We're devastated that the referee couldn't wait to give the penalty.

"The sending-off of my goalkeeper, I'll need to see that back as well. He tried to play the ball and it hit his arm. It's not like he intentionally handballed it. I don't understand that one either.

"I didn't really expect to come up here and get the decisions, but it is what it is and I'm proud of my players."

On being shown the red card, McDonald maintained he had been wrongly picked out by the referee over something that was said.

"My whole committee and our supporters were in the stand behind me and they can verify it, and their bench can verify it – it wasn't me that said it," he said. "It was somebody in the stand that shouted at the referee and for some reason he thought it was me.

"I went and spoke to him afterwards but he said he thought it was, and he's not going to change his decision. Thankfully my chairman and club secretary were in the stand and they knew it wasn't me, so I'm quite pleased that they didn't think I was being disrespectful."

McDonald added: "We were down to the bare bones and we had 10 men but I still felt we gave a good account of ourselves.

"I thought we looked dangerous but going to extra time with 10 men, after the bus journey, was never going to be easy.

"We had a good go. All credit to Wick, they've got some good players that are dangerous with pace up front."