An outdoor pool which has been in Wick for well over 100 years is set to have a new lease of life thanks to a group of local swimmers enjoying the benefits of the cold water.

Over the weekend a band of volunteers got together to make a start on cleaning out the North Baths ready for further maintenance to take place.

The baths, which were first opened in September 1904, hold many found memories for local people with quite a number learning to swim there as children.

Throughout the years local groups have often been involved in maintenance work at the North Baths, including rebuilding the walls and clearing large stones from the area.

Chairperson of the new Friends of the North Baths committee, set up to raise funds for the project, is Patty Coghill who started swimming in the outdoor pool at the end of February along with a friend.

She explained that they were photographed by Wick man Douglas Cowie who put a post on social media and everything just grew from there.

"He tagged us in it, then people sent me messages and that is where it progressed from," Patty said.

The interest soon started to swell which resulted in the recent creation of a Facebook page, KW1 Swimmers – Kool Water Sw1mmers, which has over 100 followers who have either already taken the plunge or are still considering it.

Not surprised at the interest in open water swimming, Patty said: "There is so much talk about the benefits, it's something I have thought about for the past two years. Getting the North Baths repaired is something we really hope to get going."

Last week, along with help from local diver Hugh Mackay of Mackay Underwater Technology Ltd, the valve to the pool was opened allowing the water to drain out. An old bicycle and a World War II shell was found in the process – the shell has been given to the Denny Swanson, the volunteer manager of the WWII Pillbox which overlooks the baths.

Some of the swimmers started scraping seaweed from the surrounding walls and rock on Friday, while at the weekend water bowsers and pressure washers were organised by Mr Willie Watt MBE who has been largely instrumental in the work that went on in clearing the access road to the baths.

This week local contractors GMR Henderson Builders Ltd will be helping with the removal of the boulders which have accumulated at the bottom of the pool over the years and repair a section of wall damaged in a bad storm. The outlet valve will also be fixed.

The baths themselves cover an area of 200 feet in length by 90 feet, and it was originally divided in two with a shallow end separated by a barrier where the entrance steps are. 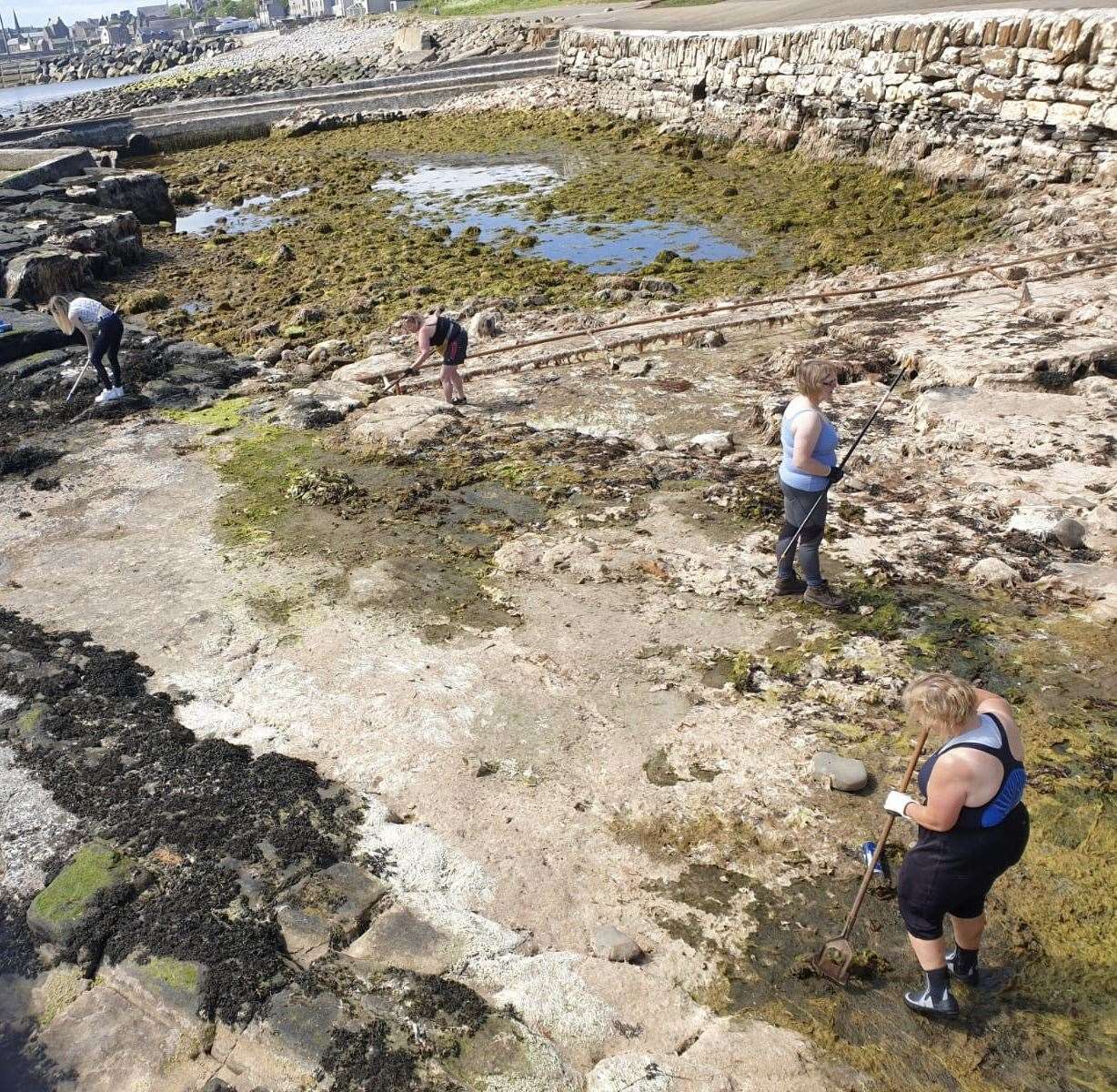 The group chairperson said: "The first fund raising we will look to do would be a bottle stall down at the North Baths once we are ready and do a swim and run event just for fun. We also hope to do a 24-hour relay swim which will be a sponsored event."

It is also planned that once restrictions ease further the group can have bottle stalls at other local community events.

Once the project is completed the group members intend to swim all year round. Winter swimming is a new thing to Patty, previously she used to swim in the summer at the Trinkie, the town's other outdoor pool which is also has a group looking into maintenance work at the moment.

While the baths are under renovation members of the group have been swimming at various other locations, including the harbours at both Ackergill and Staxigoe.

Many of those braving the cold water are wearing wetsuits along with neoprene gloves and socks, while some are just in bathing suits. It is a personal choice. "We are all pitching in and lending people the stuff they need," said Patty. "Our secretary Lynne Duncan is good at giving advice before people come and give it a try."

On one evening at Staxigoe there was around 18 swimmers out enjoying the benefits of the salt water.

Commenting on what the project had meant to him, Dariusz Sapalski, one of the volunteers helping with the maintenance, said: "I was sitting on my own the whole of lockdown – it was hitting my mental health terribly. When I received the invitation from Patty it was like 10 times a Christmas present for me.

"You feel safe with the company, not only in the water but mentally you feel safe too with the support. Now after three weeks I am a completely different person. I am really happy to help with the work."