A clean-up operation around paths leading to the East Caithness Community Campus will begin soon, Highland Council has said.

It comes after the chairman of Wick High School (WHS) parent council said that leaving the eyesore site was like "sticking two fingers up" at the pupils, parents and people of Wick.

Iain Baikie, chair of the parent council, had condemned the "ugly" sight of the former Wick High School buildings and debris adjacent to a newly opened pathway and the "downgraded proposal" mooted by the Highland Council for an access ramp to the school athletic track and sports field.

A Highland Council spokesperson said: “The removal of litter and debris from the former Wick High School site has been instructed and a contractor will commence this work next week.

"The High School buildings were previously put up for sale but to date no offers have been received. The council, after having consulted with local members, had agreed to put the property up for auction. However, Covid restrictions and adjacent construction work resulted in the auction being postponed."

The council spokesperson added that when Covid-19 restrictions ease and when it becomes possible to do so, the former WHS buildings will be put up for auction again.

The eyesore accusations arose when a cycle and pedestrian route to the East Caithness Community Campus was recently built – four years after the schools had been opened – which led directly past the old WHS buildings.

"The vista from the new boulevard leaves a lot to be desired," said Mr Baikie. “Rather than clean up the adjacent area leaving it tidy, pupils, parents and staff are treated to the ugly sight of broken window frames, fractured pallets and piles of rubbish.

"This will attract the attention of vandals and before too long the council can expect that any remaining unbroken windows will be used as target practice. I am confident if a new boulevard had just been opened adjacent to council HQ in Glenurquhart Road, Inverness, then it would not have been acceptable to leave a rubbish tip in the adjacent area."

Mr Baikie says it is almost as if the council are "holding up two fingers" to the pupils, parents and people of Wick and saying “this is all you get”.

The parent council chairman went on to tackle Highland Council over its revised access route plans for the school athletic track and sports field.

The original plans to have direct steps and ramped access have been modified to save costs and now show a two-metre by 110-metre angled ramp. 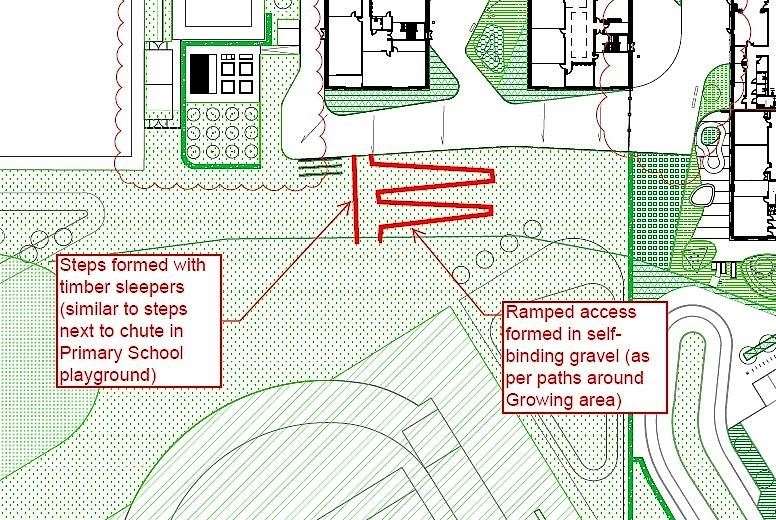 Mr Baikie said: “The original plan allowed high volumes of athletes and spectators to quickly enter and leave the sports field. For community sports events or school sports days hundreds of people will need access to the field."

He added: "The downgraded proposal will lead to congestions with traffic flowing in both directions – it will not allow the recommended two-metre separation and I think this defeats its intended purpose.

"I can see pupils simply ignoring the 110m ramp and going directly up the slope. This cheaper proposal was not discussed with the schools nor members of the stakeholder group who represent our community."

With regard to the sports field access plans, a council spokesperson said: “The design of the new access steps and footpath to the athletics pitch are being updated for consultation with the school management team/relevant stakeholders and work will go to tender once the design proposals have been finalised and approved.”

Mr Baikie says he feels constantly ignored by Highland Council and says it is "only through continuous prompts and keeping the original project objectives in the public eye" that the job will be properly finished.