Path to success for Wick volunteers

With the popularity of Wick's riverside as a walking and exercise area soaring since the first lockdown, the work of volunteers to maintain the area has been greatly welcomed.

On Friday, a small group of Wick Paths Group (WPG) volunteers met at the riverside fountain for some "organised outdoor exercise" and while socially distanced relaid the path alongside the river with tar chippings before flattening it with a vibrating roller and leaving it to firm up.

"It has made quite a difference, while we were at it we also scraped back the encroaching vegetation and then swept the caravan park access road," said WPG secretary John Bogle.

The selfless work of the volunteers – which continued into the following day – did not go unnoticed, however, with Wick Caravan and Camping Site posting a message on its Facebook page saying: "We just wanted to say a huge thank you to all of the volunteers, who gave up their time to tidy and resurface the alternative access road to our campsite. "You are all truly amazing and we can’t put into words how much we appreciate everything that you achieved today. Keeping our fingers crossed and looking forward to hopefully opening the site, some time in May."

After a full-day of hard work at the fountain path on Friday, the volunteers "excelled themselves" the following day by completing the work scheduled for two days by mid-afternoon, according to the WPG secretary.

Mr Bogle sent out a heartfelt thanks not only to the volunteer team, who turned out "for some organised outdoor exercise", but also to Royal Burgh of Wick Community Council (RBWCC) chair Joanna Coghill who provided refreshments along with the owners of the caravan site. 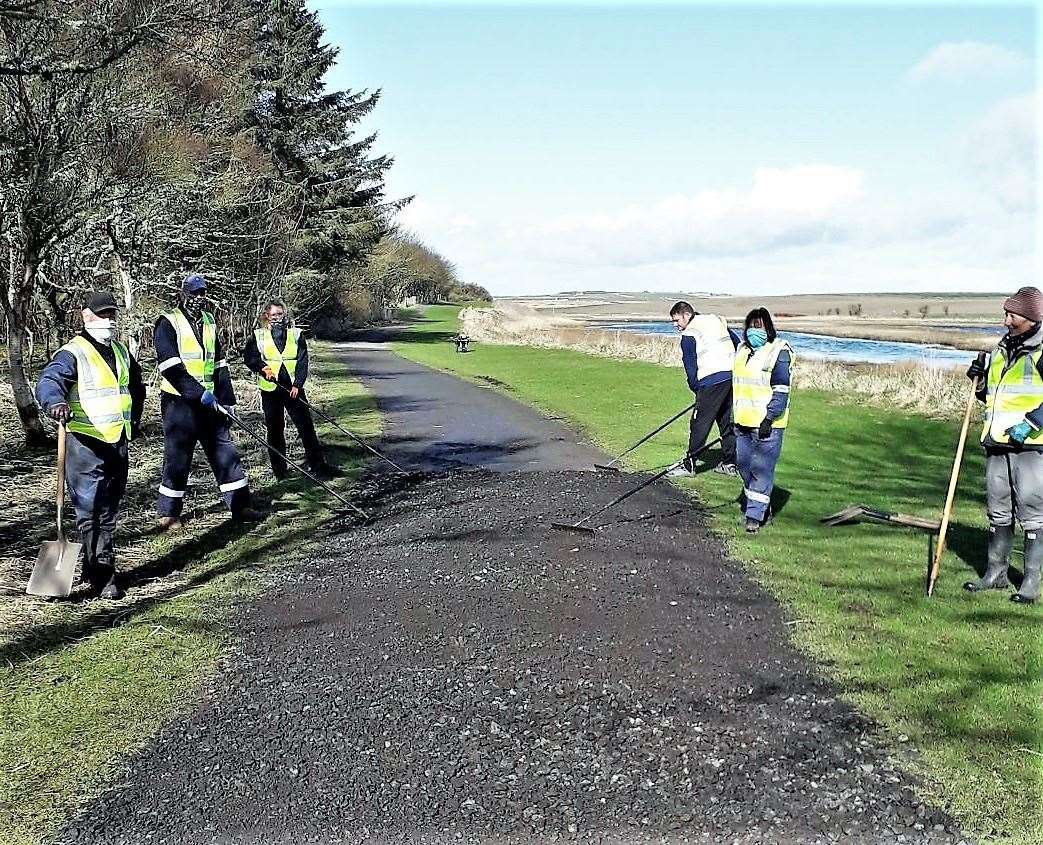 "A big thanks to Highland Council for arranging for most of the path to be scraped before we started and to MM Miller and Subsea 7 for lending us the machinery which made the job less back-breaking. Thanks also to Gunns of Lybster who provided the tar chippings free of charge."

"Unplanned" assistance was also given by Douglas Ronaldson with his teleporter, SID Building Services for loan of a motorised brush to clean the paths and Hugh Simpson (Contractors) Ltd for use of machinery. "Without their help we would not be able to bring about these improvements to the local environment," he added.

Mr Bogle went on to point out that though a lot of work was achieved over the two days there was much preparation done in advance and this had been largely undertaken by project lead, Willie Watt.

"He ensured that everyone knew what to do and that we complied with Covid restrictions – in the run up there were several problems that he also had to deal with swiftly." In addition, 53.45lbs of rubbish was also collected from around the paths and river bank. Allan Bruce and his family then went on to tidy up the path around the Calder statue.

Further along the river, the fountain area is undergoing a transformation as well, in a project led by the RBWCC chair.

Mr Bogle said: "A grant was received from Beatrice and a bench has been ordered – a new pump for the fountain has also been delivered. The council has scraped out the paths behind to the right of the fountain and will be placing a picnic bench in due course. We had hoped to have everything done by April but the Covid restrictions have held everything up."