OUT AND ABOUT WITH RALPH: A paddle on Loch Eriboll offers a trip back in time in more ways than one

Over a year had passed since I last visited the remote bothy near Whiten Head in stormy conditions just before the first lockdown.

Now, with some easing of travel restrictions, I planned a day on Loch Eriboll, paddling out from Ard Neackie.

It was quiet, grey weather though a big swell rolling in from the north-west meant I’d not be able to explore the fine sea caves out towards the headland.

The hills around still looked very wintry, dead yellows and browns with streaks of snow on the tops.

The sea was calm for launching and I followed behind a small creel boat, under the low cliffs and on past the little lighthouse a couple of miles north, where the cliff below has also been whitened with paint.

Just beyond is a small, rough and rocky island, Sgeir a’ Bhuic – it’s the sort of place I love to visit knowing very few people ever set foot there.

Another two miles across the open sea took me to the headland just west of the bothy, there’s a magnificent sea cave but the swell was smashing into it and up the cliffs.

The bay under the bothy was more sheltered and landing on the stones was easy. I pulled the boat up and took the very familiar short walk across the moor to the building I first saw over 40 years ago.

It was indeed rather a sad visit. This was a favourite haunt of Bernard and Betty Heath who did huge amounts of work in renovating and looking after the place. Betty passed away recently leaving Bernard, who now has little memory of his adventurous past. Rain spotted gently under the grey skies.

The bothy, though, was clean and in excellent shape, unsurprisingly there had been very few visitors over the last year. I ate my lunch and walked back round the bogs and old lazy-beds to the shore. Almost nothing here has changed in nearly 50 years.

The coast southwards always makes a good route, paddling just offshore from extremely rough ground and steep broken cliffs, scenery which can be enjoyed with little effort. Quite a big swell was breaking onto boulders and over hidden skerries so some care was demanded, the sea is too cold at this time of year for an unintended swim!

I looked at the waterfall cave, where the Allt an t’ Strathain plunges over the mouth of a sea-cave, there is a sandy beach at the back and the cave links with another just to the south, but it was too rough to enter.

Another couple of miles under the steep slopes and cliffs of Goat Hill led to the mouth of the River Hope. On the western side is a fine beach of shingle and sand which would make a very good place for an overnight camp. It’s a lovely peaceful spot, a few yellow primroses spangled the slopes above the beach – indeed the whole day was one of great quiet other than for the sound of breaking waves and the occasional yodelling call of a great northern diver.

Strangely I’ve never walked the few miles from here back to Ard Neckie, with Ben Heilam and several lochans to explore. The first mile of coast presents a bleak, austere stretch of cliffs to the sea, the caves face north and look dark and unfriendly, I never feel at ease till round the next corner and back into the more sheltered regions of the loch.

Many is the hard paddle I’ve had here into south winds which often pick up in the afternoon – and, sure enough, the wind was picking up. Local conditions here and in the Kyle of Tongue can confound the confident predictions of the weather websites. But there was plenty of time and I could enjoy looking at the little bays and waterfalls and remains of old settlements.

An otter splashed under the cliffs, no, three animals swimming and diving and showing no great fear of the boat.

Back at Ard Neackie the wind was starting to whistle, evidently it had not listened to the forecast. 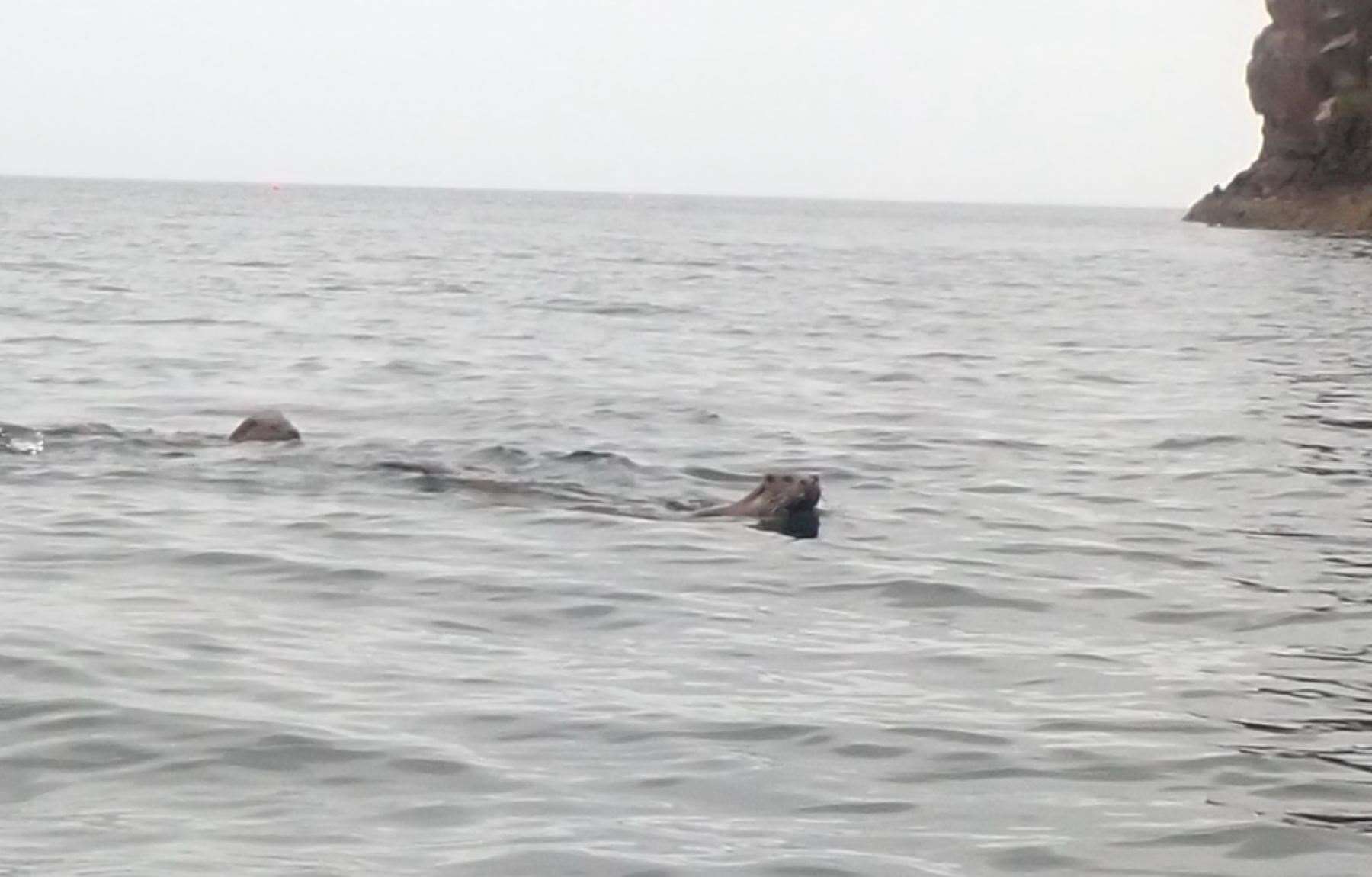